Modern slavery is a serious and brutal crime in which people are treated as commodities and exploited for criminal gain.

Exploitation takes a number of forms, including sexual exploitation, forced manual labour and domestic servitude, and victims come from all around the world – men, women and children. For adults, lies and force are always used to gain control over the victim.

Modern slavery is a global business and a serious organised crime that makes abusers lots of money. It takes place in ordinary cities and towns across the UK, with victims often found in restaurants, fisheries, brothels, farms, hotels, pop-up industries such as car washes, and in people’s homes.

The Human Trafficking Foundation reports that “there are more people in slavery today than in the entire 350 year history of the transatlantic slave trade”.

Some people confuse modern slavery and human trafficking with illegal immigration, people smuggling, or migrant working which can mean people don’t report it when they see it, and victims are frightened to come forward and get help.

Your abuser may try and tempt you into a new life, telling you that things will be better if you go with them and do as they say. They will lie to you, coerce you and manipulate you.

Once trapped by your abuser, you may feel unwilling to come forward to police or other agencies because you do not see yourself as a victim, or you are worried that you may also get in trouble. You may work with your abusers to hide what is happening, for fear of violence against yourself or your family, or because you are reliant on them for basic human needs, such as food or a place to stay.

You may be scared that you will be sent out of the country or punished by authorities. Some victims are made to believe they will be cursed by witchcraft rituals.

You may feel, alone, frightened, and powerless. But help is available and you have options.

Types of slavery and exploitation

Many people working in the sex industry have been trafficked. Your abuser may be taking nearly all your earnings from you and constantly move you around the country to keep you isolated and disassociated from any particular area.

If you are working as a domestic servant, you are very vulnerable to abuse. You will probably be working alone and feel isolated from friends, family or support agencies. You will be at risk of abuse and exploitation from your employers. Reliant on your employer for your work, accommodation and immigration status, you may find yourself in a position with little to bargain with, becoming trapped into a life of slavery. You may accept harsh treatment, little or no pay and long working hours.

You may be forced to work on farms or in factories for hardly any pay – or no pay at all – in places such as farms, factories, car-washes or delivering leaflets. Your passport may have been taken from you. Your living conditions may be poor, and your working conditions potentially dangerous. It’s not just people from overseas who are affected – there have been cases in the UK of British men being forced to work in terrible conditions, day and night, with little or no pay.

If you are a child that has been trafficked, your abusers may hit you and hurt you. You may be forced to have sex with people, made to work for no pay, pressured into marrying someone you don’t want to, given up for adoption, or made to take part in activities that are against the law, such as pick-pocketing, stealing from shops, or growing cannabis (marijuana).

Help if you don't speak English

If you do not speak English, you will find it especially difficult to get help. Information about help for victims of slavery and trafficking is available from the government in different languages.

Spot the signs of modern slavery

The Modern Slavery Helpline has put together a list to help you spot the signs of modern slavery. Look out for victims hiding in plain sight and help us shine a spotlight on this hidden crime.

What is the national referral mechanism?

If you are a victim of slavery or trafficking, you are entitled to help and protection from the UK government, called the National Referral Mechanism. This makes sure you get looked after for 45 days while you get back on your feet.

All support offered as part of the National Referral Mechanism is offered in confidence. You will also be entitled to protection and legal advice.

You can get help:

Agencies such as the police or a local council can refer you to this help. If you want to refer yourself, ring the Salvation Army helpline on 0300 303 8151. You can also ask for a referral from the agencies below:

In Greater Manchester we are determined to protect victims of slavery and trafficking, and to help them get the help they need.

To find help and support you can:

You can also speak to someone from any of the organisations listed on the Modern Slavery Helpline website. These include:

How to report it

The law in the UK is designed to help protect victims of slavery, even if they have been forced to carry out activities that are against the law. The police should put victims first when investigating reports of slavery and trafficking.

The Modern Slavery Helpline also has an online form that lets you report modern slavery and human trafficking.

In an emergency: dial 999
An emergency is when a crime is being committed or has just been witnessed, there is a risk of injury, or a risk of serious damage to property. 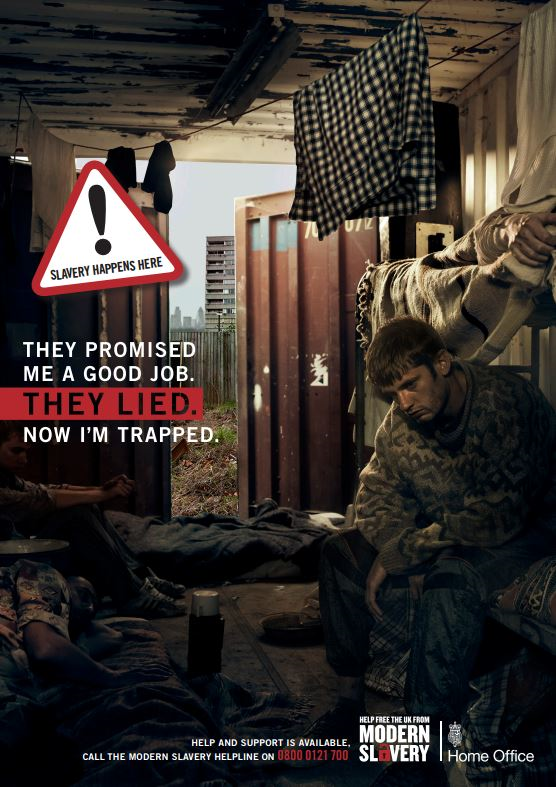 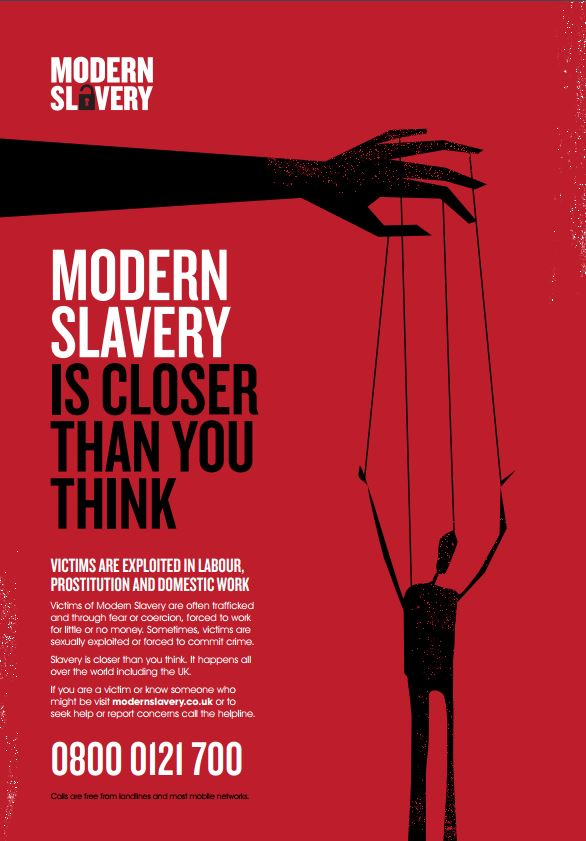 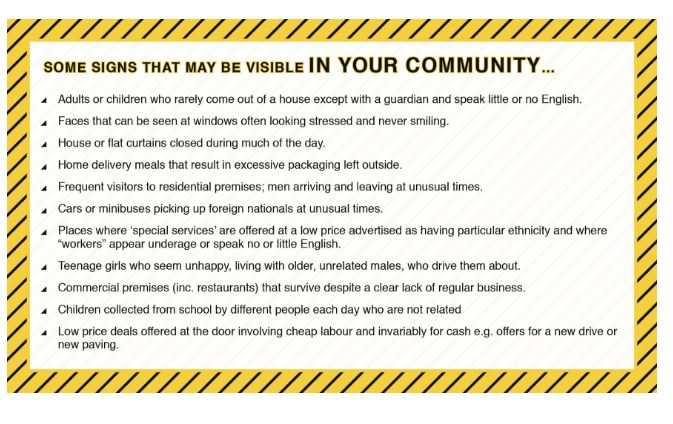 If you need help for yourself or someone else, or you want to report something, help is available from the Modern Slavery Helpline.

If you don't speak English

Help is available in different languages for people who don't speak English.

Spot the signs of modern slavery. If you've seen the signs, tell someone.